Posted on January 10, 2019 by thomasmanningmovies

I think the phrase, “You’ve never seen a movie like this before,” is overused, clichéd, and takes away the significance of films that are TRULY unique. Yet, with Aneesh Chaganty’s film Searching, the audience is indeed shown a one-of-a-kind intriguing narrative full of masterfully-written mystery, suspense, and thrills that all unfold on the screen of a computer.

Every bit of footage we see is either from a webcam, a cell phone, or online news coverage, immersing the viewer in the familiar setting of a 21st-century technology 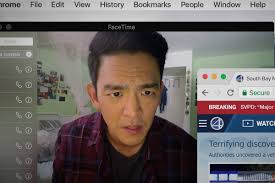 screen. The intimacy created by this inventive cinematography style forms an effective emotional bond between the viewer and the characters, notably David Kim, the father portrayed by John Cho, who is hell-bent on finding his missing daughter, Margot (Michelle La). 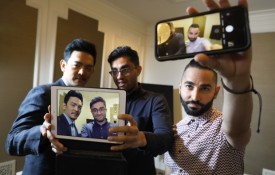 With the story unravelling on a computer screen and through the internet, Chaganty and fellow writer Sev Ohanian were able to incorporate ingenious references, easter eggs, clues, and hints to the perplexing circumstances, even alluding to some considerably stranger happenings. The untold measure of hours spent editing by Nicholas Johnson and Will Merrick (who also served as Directors of Virtual Photography, in addition to main DP, Juan Sebastian Baron), resulted in a truly magnificent final product, thanks to the group’s scrupulous attention to detail.

To wrap things up, it is of course paramount to note the compelling score from composer Torin Borrowdale, whose music further developed the tones of tension, excitement, and turmoil.

Perhaps one of the most astounding statistics of this film is its remarkably low budget of $1 million. If there’s one thing to be taken away from Searching, it is that this film was made so amazing by the team’s extreme passion and devotion to their craft.

One thought on “Searching: Still Searching for the Words to Describe this Film”