Posted on February 7, 2019 by thomasmanningmovies

With the upcoming release of “Happy Death Day 2U,” I thought I’d go back and take a look at the original from 2017. 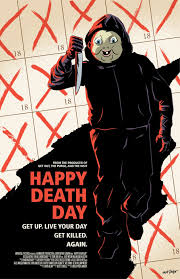 Director Christopher Landon and screenwriter Scott Lobdell bring this dark comedy/suspenseful mystery to the table from Blumhouse Productions, the king studio of horror and suspense. Using the classic Jason Blum formula, “Happy Death Day” worked with a budget of $4.8 million to eventually profit over $120 million. With a very small cast and limited use of visual effects, more focus is placed on production design and the telling of a compelling story. 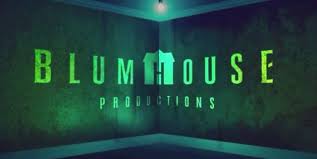 Speaking of plot, it should be noted that “Happy Death Day” of course borrows a lot from the Bill Murray classic, “Groundhog Day.” Main protagonist Tree Gelbman (Jessica Rothe) finds herself living the same day over and over again, but that’s where the similarities with “Groundhog Day” end. Tree is repeatedly murdered by a masked figure, and must keep dying until she can find the killer’s identity and break the loop, with the help of unlikely companion Carter Davis (Israel Broussard). 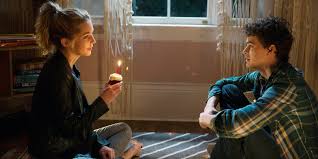 While there are certainly the negative college stereotypes of drinking, partying, sex, and drugs prominently displayed, there is a surprisingly rich and positive character arc seen in Tree as she discovers more about herself in the endless loop of death and pain. 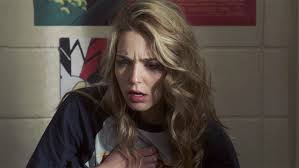 The ominous and disturbing tones of insanity, murder, and anguish are progressed further by excellent shot selection from cinematographer Toby Oliver. Additionally, Bear McCreary’s musical score supports these inflections even more. This is all tied together by a solid editing operation from Gregory Plotkin. 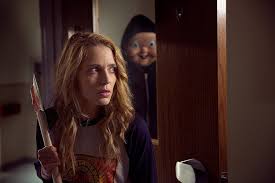 “Happy Death Day” is far from award-caliber cinema, but it’s goofiness, stupidity, and ridiculousness were exactly the intentions of Landon. Audiences might even walk away touched by the core themes of the narrative.
Grade: B-

Give this one a shot, and get ready for the sequel, to be released on Valentine’s Day weekend.

“Happy Death Day,” available on Blu-Ray on streaming on FoxNow. 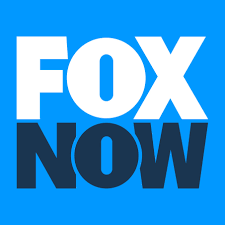 2 thoughts on “Happy Death Day: Blumhouse Productions in a Snapshot”