A few weeks ago, I reviewed 2017’s “Happy Death Day” from director Christopher Landon (in association with Blumhouse Productions), in preparation for the newly released “Happy Death Day 2 U.” Here is a recap of my thoughts from the sequel:

While the first “Happy Death Day” placed more focus on creating a horror comedy, “Happy Death Day 2 U” is an amalgamation of several different genres, including drama, mystery, comedy, and science fiction. A similar scenario arises for the main character, Tree Gelbman (Jessica Rothe) compared to the original, as she finds herself stuck reliving (and dying) in the same day over and over again. Yet, the factors that enact this time loop are beyond anything I was expecting in a goofy horror film like this one. I am not going to elaborate on spoilers, but I will certainly say that the sci-fi twist was one I did not see coming.

As I discussed in my analysis of the first installment of the franchise, I was pleasantly surprised by its respectable character development and authentic emotion. Still, the sequel places even more attention on these concepts, as the characters are forced to make life-changing decisions (quite literally) that will have impact far beyond their personal livelihood. Family, friendship, loyalty, and love are all incredibly prominent in this narrative. Screenwriters Christopher Landon and Scott Lobdell constructed a multi-layered storyline with relatable characters thrust into extraordinary situations. Jessica Rothe’s performance as the protagonist is impassioned and touching, yet hysterical and comedic. Supporting cast members Israel Broussard, Phil Vu, Suraj Sharma, Sarah Yarkin, Rachel Matthews, and Ruby Modine provide charming (albeit formulaic and clichéd) performances. Although there are a few plot holes within the screenwriting, this is to be expected in a story such as this one that takes such a sharp sci-fi turn.

In looking to the cinematography (Tony Oliver), it is of course not award-winning photography, but it is effective in creating the various tones of the film, from suspense, to parody, to wild and outlandish. Bear McCreary’s musical score further complements these themes. However, it is the expertly-precise editing style from Ben Baudhuin that steals the show. With a narrative concerning a time loop and the continued repetition of a single day, there are multiple montages that serve to more quickly progress the story. One in particular really left a mark; this particular instance basically recaps the entire plot of the first film, ensuring that the viewer is caught up to speed on the unfolding events and their significance. I would even go so far as to say that one could walk into this film without viewing the original, and still coherently understand the occurrences and happenings. 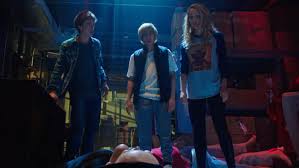 Overall, I would personally say that this is a rare occasion in which the sequel outperforms the original. With the notoriously low budget formula of Blumhouse Productions, in addition to a tease at the end of the film, do not be surprised if we see more from the “Happy Death Day” franchise in the near future.

One thought on “Happy Death Day 2 U: Bends the Mind, and the Genre”