Oscar-nominated actor Chiwetel Ejiofor makes his screenwriting and directorial debut with “The Boy Who Harnessed the Wind,” based on the autobiographical book from William Kamkwamba. Detailing the remarkable story of a young man in an extremely poverty-stricken region of Malawi on the continent of Africa, this narrative follows William (Maxwell Simba) as he overcomes starvation, lack of education, a tumultuous family life, and every other obstacle imaginable for a child living in a third-world country.

In this particular region of Africa, the seasons alternate between periods of abundant rain and flooding, and those of severe drought and dryness. In the year of 2001, there is a notably difficult cycle lacking rain and precipitation which results in widespread hunger, as the crops are impacted. The people of Malawi are totally on their own, as the government in the country is riddled with corruption and malfeasance, and the worldwide economy takes a massive hit with the tragic September 11 terrorist attacks on the World Trade Center in New York City. Neighbors and friends in the region become thieves and swindlers, for the sole purpose of survival. Families are torn apart from their very cores. In the midst of this inconceivably horrendous situation, young William Kamkwamba moves forward with unbelievable determination, resolve, and wisdom. Making do with limited resources from junk piles and the surrounding environment, the young boy recognizes that there may yet be a solution to this famine by means of renewable energy. Although there is no natural rainwater to be found, the power found in the strong winds of the region can possibly be utilized as a means of pumping water from deep within the water wells of the village. The ingenuity and cleverness that William displays is truly magnificent. 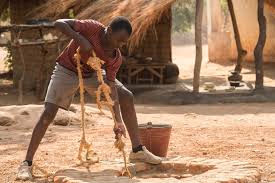 Maxwell Simba produces a stellar performance in his feature film debut, showcasing all of the incredible qualities found in this young boy. Through his portrayal, the audience gains a glimpse into the brilliance, compassion, and courage of the child, while they are also reminded, consistently, that he is indeed an innocent juvenile who lacks true experience and knowledge of many of the world’s cruder elements. William’s father, Trywell Kamkwamba (Ejiofor), approaches the famine and its associated issues with a straightforward, “tough-it-out” approach. He believes that physical strength and sheer will can solve the problems. This stark contrast in ideals from William and his father leads to the development of dangerous friction in their relationship, as well as a hindrance in William’s progress on his special project. This challenging family dynamic ensures still another speed bump on William’s road to the objective of ending the village’s hunger. 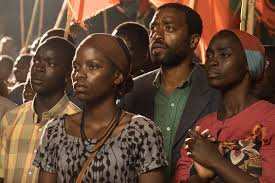 Audience members from all walks of life can surely be touched by the essence of this narrative’s themes. Chances are, if the audience gets the opportunity to watch this film through Netflix, it probably comes from a relatively stable socio-economic situation. The ability to engage in entertainment, such as this film, at one’s fingertips is definitely not a privilege that other people around the world possess. A viewer may watch this film and recognize that they are sitting at home comfortably on their couch, feeling deeply impacted by the emotion of this story. Just imagine how exponentially greater the emotion is of those actually experiencing the hardships in real life. Audience members can have their eyes opened to the ever-present societal issues that are faced by the less-fortunate around the world. Better still, they may even be motivated and convicted to approach these problems with direct intention and proactivity. While they cannot solve these deeply-rooted complications by themselves, they can do their own part on a smaller scale, through programs such as food drives, or even donations to charitable organizations focused on fighting world hunger.

In examining some of the technical elements that made the dynamics of this film all the more palpable and effective, everything blended together beautifully to produce a gorgeous aesthetic and engrossing movie-watching experience. The stellar cinematography from Dick Pope incorporates everything from sweeping scene-setting shots, to intimate, personal, emotionally-poignant close-ups. The exceptional sound design offers an immersive glimpse into the plains of Malawi, ranging from the power of overwhelming floods during the rainy season, to the strong winds rustling the dry brush in the worst of the drought. All of the sounds from the birds and other creatures of the wilderness provide foundational ambiance and depth to this audible design as well. Antonio Pinto’s versatile score, equal parts majestic and tribal, is everything one would expect in this style of narrative. The art direction (João Bueno), production design/set decoration, and costume design (Bia Salgado) are masterfully handled, breathing life and realism into the Malawi villages and African environment. Film Editor Valerio Bonelli provides a smooth stability to the story’s flow, neatly tying all of the other technical aspects together.

Ejiofor’s talents as an actor have never been in question, but his debut as a director and screenwriter has displayed the incredible diversity of his chops in the filmmaking industry. Although he’s spent most of his career in front of the camera, do not be surprised to see more projects down the line with Ejiofor at the helm behind the scenes. “The Boy Who Harnessed the Wind” is likely only the first step into a wider world for him as a writer and director.

One thought on “The Boy Who Harnessed the Wind: Chiwetel Ejiofor’s Moving Directorial Debut”