The premise of Free Trip to Egypt on its own is enough to grab any person’s attention who is remotely aware of the state of our world’s societal and political issues. A Muslim man of Egyptian heritage, Tarek Mounib, sets out to bring together a group of people from various cultural, religious, and political backgrounds, for an all-expenses paid trip to Egypt. The primary objective of this operation is to open the minds of these individuals to not only each others’ opposing viewpoints and beliefs, but also to the culture of Egypt and the Middle East. There are a multitude of issues and obstacles that could lead to a disastrous nightmare. For instance, what guarantee is there that this is not some sort of malevolent scheme, perpetrated by terrorists or human traffickers? What about all of the horrific violence and crime associated with Egypt, based on news stories and other reports? Even with all of that aside, there are a wide array of other internal conflicts that may arise within a group of such ideological diversity, not to mention the logistical mechanics of the ordeal. Somehow or another, Mounib managed to bring together a group of seven individuals from throughout the United States for the cultural experience of a lifetime. 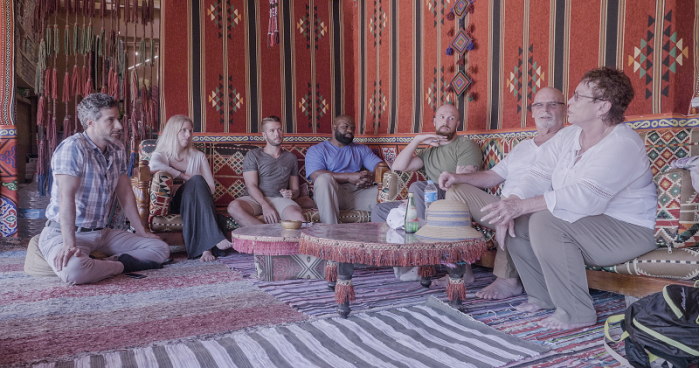 Out of Casa Grande, Arizona, there is Katie Appeldorn, a 38-year-old Marine veteran from a Christian background and single mother to two sons. Additionally, there is the married couple, Ellen (age 70) and Terry Decker (age 69), from Conowingo, Maryland. Members of the Jewish faith, this couple, by their own admission, struggles with racism and xenophobia, especially in the years following the 9/11 terrorist attacks in New York City. Then there is Brian Kopilec, a 28-year-old Marine veteran and conservative Christian from Louisville, Kentucky. Kopilec brings two of his acquaintances into the fold, Jenna Day and Jason Reynolds. Day is a Christian, 27 years of age, working as a singer and actress, and is also a former Miss Kentucky. Reynolds is 33-years-old, a former atheist and drug addict, who is now devoting his life to pastoral and missionary duties in Louisville. Finally, Marc Spalding is a 46-year-old African-American police officer, also from Louisville. This whole group was shepherded by Tarek Mounib, a Swiss citizen, originally born in Canada to Egyptian parents, and a member of the Islamic faith.

It is no secret that certain occurrences within the United States over the past few years have led to a deep divide not only within this singular country, but throughout the entire world. One of the most significant hindrances to potential progress is the lack of honest, respectful, open dialogue between groups from varying backgrounds and viewpoints. Tarek Mounib’s courage to even attempt this seemingly impossible project is worthy of great recognition and applause. Yet, perhaps the most impressive part of the endeavor are the steps forward that were made, even if only within this small group. A common worry and source of unease for each member of the group was the negative connotations associated with locations like Egypt. The common perception is that the media and various journalism sources in the US mostly focus on the violent conflicts and occurrences in Middle Eastern countries. Whether it is terrorist groups like ISIS or Al-Qaeda, or civil wars, or even conflicts in which the US Armed Forces are involved, there is rampant adversity that dissuades the interest of US citizens. The true cultures of Egypt and other Middle Eastern societies are tragically misrepresented by the accepted stereotypes and conventional ideas. Incredibly, each person on the trip was moved and touched on one level or another by the reality of Egyptian culture. Rather than gunfire in the streets and violent crime around every corner, they saw a relatively peaceful way of life. The culture is, of course, undeniably a huge contrast from everyday American life, whether it is the traffic laws, architecture of housing developments, traditional clothing fashion and style, or religious practices. Yet, at the core of everything, these are just people with many of the same life experiences, concerns, hopes, and dreams compared to every other person in the world. They are human beings who have felt triumph and pain, loss and happiness, confusion and peace. Egypt has a vastly different culture from the outside looking in, but one with remarkable parallels to the US and other countries around the world when strictly examining the human element. Understanding this fact was precisely one of the outcomes for which Mounib hoped, and this part of the enterprise was unquestionably a success.

Over the course of this process, the group also learned to listen to each other and take into account the diverse opinions and beliefs. There were unavoidably some growing pains, arguments, and minor conflicts. Yet, at the end of the day, no advancement or positive evolution would ever have been made without these challenges, debates, and conversations. This contributed to some very fascinating dynamics and interactions among the group. Each viewer will identify with a different relationship explored in this documentary, based on their own background and beliefs. Those of the Christian faith might be impacted more by the connections developed between Tarek Mounib and Jason Reynolds, Brian Kopilec, or Jenna Day. Reynolds, the converted Christian with a troubled past, had difficulty personally accepting that Mounib practices Islam. He struggled with the notion that Mounib’s Muslim faith was just as deeply-rooted as his own Christian faith. On the other hand, Kopilec, the right-leaning conservative Christian whom Mounib met at a rally for President Donald Trump, was actually more accepting of the practices and beliefs of Mounib. This may come as a surprise to some, but watching it play out will surely lead viewers to introspectively examine their own lives and ask themselves tough questions. There is something to be found for a remarkably wide array of audience members. Regardless of racial ethnicities, religious beliefs, or political affiliations, viewers will be challenged, convicted, and inspired to learn more about the people around them. 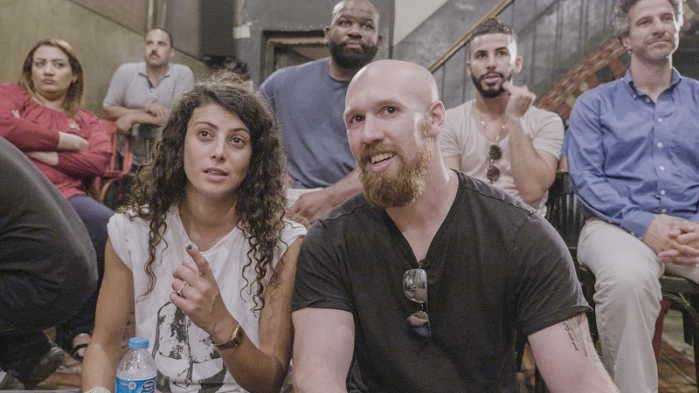 In terms of this documentary’s technical elements, it is beautifully shot by the team of cinematographers, intricately edited by Kurt Engfehr and Pierre Haberer, and adequately supplemented with a soundtrack and original score by Forest Sun. With documentaries, it is difficult to know for certain what style and approach will be taken by the director. Some are shaky, raw, found-footage types of features, and others are dominated by narrations, interviews, and B-roll footage. This particular film falls more in line with the latter description, supported by the directorial efforts of Ingrid Serban, as she crafts a unique feature that displays both the general themes and the more intimate ideas of the story.

Still, it is hard not to feel that they could have dug a little deeper into some of the relationships and communications between the members of the group. At just over 90 minutes, this documentary does not waste any screen time, but it might have even benefited from an extra 20 minutes to further flesh out some of the interactions and developments between the different subjects of the documentary. Everything that was shown to the audience was brilliantly handled and beautifully portrayed. However, one may be left desiring more. The ending of the narrative felt slightly abrupt and sudden. Nevertheless, Free Trip to Egypt is comprehensively a gripping and poignant documentary that truly shows how there is always more to bring us together than there is to divide us. The essence of human nature is not dependent on skin color, creed, personal beliefs, or any other specific ideal. True human nature is represented by honest emotion, unapologetic compassion, and unfiltered acceptance.

One thought on “Free Trip to Egypt – A Film for Everybody”