Posted on October 28, 2019 by thomasmanningmovies

Everybody has probably stretched the truth to a certain extent at one point or another when trying to impress someone. Well, in this case, Conor (portrayed by Ferdia Walsh-Peelo) finds himself desperately trying to put a band together, to catch the attention of the pretty girl across the street, Ann (Kelly Thornton). Unfortunately, there are a few catches. Conor does not have many friends, his musical background is sparse, and he is not exactly the suavest of individuals. From director and co-writer John Carney, along with screenplay comrade Simon Carmody, “Sing Street” delivers on everything promised by its captivating premise.

The young acting talent knocks it out of the park across the board. Of course, Walsh-Peelo steals the show with his convincing fish-out-of-water performance, but Thornton’s initial subtle mysteriousness and eventual character progression is impressive in its nuance. Jack Reynor also provides an outstanding supporting performance as Conor’s older brother, Brendan, a former wannabe rockstar who has become a washed-up has-been. The relationship dynamic between Conor and Brendan is just as compelling as the story’s primary focus on Conor and Ann; yet it does not overshadow the central relationship arc. Carney and Carmody’s ability to strike this balance in the screenplay is worthy of commendation.

The diverse soundtrack of original music worked into the film that commentates on the narrative is utterly magnificent. Conor’s young band, (Sing Street, the film’s namesake), develops their own music, inspired by the likes of Duran Duran, The Cure, and Hall & Oates. As the audience, we truly care about the success of this band, as they come into conflict with elder authority and contemporary bullies alike. The challenges they must work to overcome have us rooting for them the entire time. We are always looking forward to their next musical breakthrough, or their latest escape from a slippery situation. When your protagonists are this likeable, you know you are doing something right as a filmmaker.

Looking to the aesthetic and visual style of the film, the production design, costume design, and hair-and-makeup are superbly crafted, further developing the 1980s period atmosphere. The cinematography (DP Yaron Orbach) is brilliant as well, with exceptional shot-selection, fluid camera motion, and stellar wide-angle shots, including those which are obviously modeled after album covers, with the members of the band in a V-formation, slowly walking toward the camera. Additionally, the strong work of editors Andrew Marcus and Julian Ulrichs is on display with the well-navigated pacing and tightly-stitched transitions. Everything just seems to fall into place from both a technical and narrative perspective, and there is really not much of anything to nitpick.

I do not give out perfect scores very often, but I truly believe that this is one of the greatest coming-of-age stories of our generation, and of all time, for that matter. “Sing Street” is right up there with the likes of “American Graffiti,” “Ferris Bueller’s Day Off” and “The Breakfast Club,” and should practically be required viewing for young people everywhere. I cannot give “Sing Street” anything less than an A+. 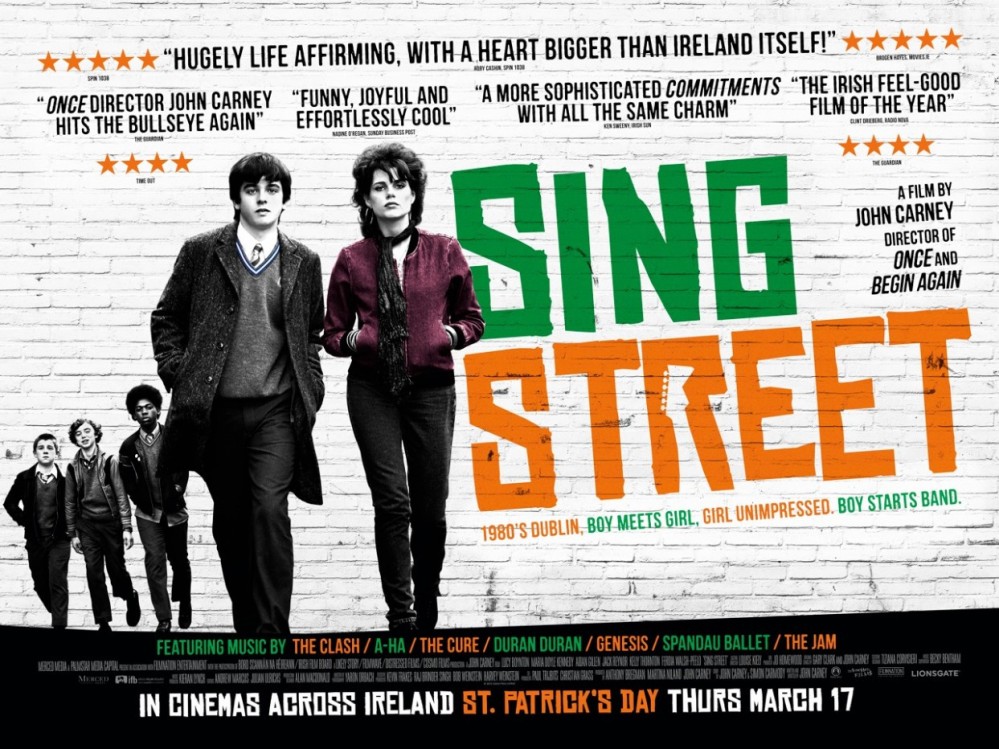